What does the Avaya, RingCentral Partnership Mean for You? 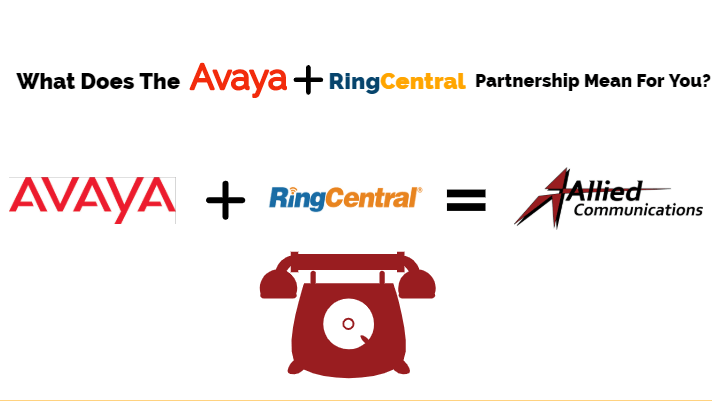 As many of you may have heard at this point, Avaya and RingCentral have formed a strategic partnership. In this partnership the RingCentral platform will become the exclusive cloud offering in Avaya’s portfolio and will leverage Avaya hardware and services.

We see this is good news for our Avaya clients as it stabilizes Avaya’s UCaaS offerings and now gives us a solid platform to share with our clients. It also, reduces the cloud confusion found in the current Avaya cloud portfolio, which consisted of multiple offerings based on client need, size, and requirements.

This partnership was made with RingCentral making a heavy investment into Avaya. This strategic partnership is made without the complex logistics or employee shakeup that is often found in a traditional M&A event. Additionally, it solidifies what has long been known, you need to move to the cloud to survive.

For those that don’t think there is a fast movement to UCaaS consider this stat provided the 2019 Global Frost and Sullivan survey that showed that 40% of businesses have already moved to the cloud and an additional 46% plan to do it in the next 2 years. Another statistic that backs this statement is Avaya’s $1.4B market cap with 100 million users vs. RingCentral’s $14.4B valuation on just 2 million subscribers.

What’s in it for Avaya?

Let’s start with cash. The RingCentral investment has helped Avaya to pay down $250 million in debt, allowing them to create shareholder value through a re-purchase program of over $500 million In stock.

This enables Avaya to move to a service provider model without the complexities that are normally found in that transition. They are acquiring access to RingCentral’s leading UCaaS platform delivered by a market leader for unified communications in the market today with over 2 million subscribers.

This partnership differentiates this offering from others in the UCaaS market by wrapping around Avaya branded hardware and services solutions, an area that they have long been regarded as a market leader.

What’s in it for RingCentral?

It starts in the customer base. Avaya has over 100

million installed users globally. RingCentral gains access to Avaya’s client base, which greatly reduces its cost of customer acquisition. It also provides them preferred vendor status with those clients versus being an external vendor trying to convert services.

RingCentral also benefits from the Avaya brand, which has been long regarded as a quality telecommunications company with innovative technological performance. By co-branding with Avaya, it immediately adds a level of trust to their relationship with clients and prospects.

Additionally, there is a financial boost. All revenue generated by this partnership will be reported through RingCentral paying Avaya recurring payments which will be treated as a sales and marketing expense. I Immediately giving RingCentral an incredible boost in revenue and many new long-term growth opportunities.

What’s in it for you?

So everything above is good for both companies but what does this mean to the end-users.

First, it stabilizes operations at Avaya. Over the past 10 years, Avaya’s financials have long been documented as unstable. This calms the financial concerns surrounding the company and reduces the risk of a formal acquisition in the near future.

It also means investment protection for Avaya customers that are still mid-lifecycle with their current Avaya systems. Your systems will continue to be supported without change.

At the same time, this partnership provides you with a solid roadmap to an eventual migration to cloud-based services with a proven UCaaS platform provided by the market leader, combined with exceptional hardware from a brand you trust. The two companies are already working on its suite of migration tools to make that process of moving to the cloud seamless for customers.

Finally, it helps us serve you. For our loyal clients we are now able to serve you both on premise and in the cloud with Avaya products. If you are exploring Unified Communications as a Service, you can rest assured Allied will be able to support you in that migration.

Let us know your thoughts about this partnership and if you would like to learn more schedule a call with us here.

Get your copy now!